Backstory:  I first shared this post in April 2010, a fact reflected in certain (outdated) references – Borders and BlackBerry – and behaviors (tweeting, still new to me at the time).  Times have changed and so has my writing. I’m pleased to share a much-abbreviated post, shortened by 200+ words, with the same goal:  a Great Read recommendation!

Do you tweet? You know. That thing people do online and on their phones, sending frivolous messages to one another about ‘absolutely nothing’ in 140 or fewer characters.  Only kids tweet, right?  Not really. It’s a fad, right? I’m rethinking my viewpoint on that, too.

I began tweeting last summer, having little idea of what I was doing, but engaged in it nonetheless.  Then, a new school year began and I got sidetracked.  Not a chirp for months. Until recently.  For no known reason, I began making noise again.  And thinking about that noise. Who was hearing me?  Who wasn’t hearing me? Who did I want to hear me?  Why did I want them to hear me?  And…. how could I make my messages more creative?

While thinking about all of this tweeting, a visit to the bookstore enlightened me further….

How to write short 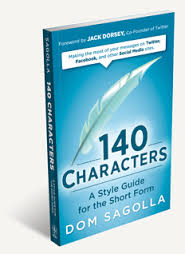 I discovered 140 Characters: A Style Guide for the Short Form by Dom Sagolla, one of the co-creators of Twitter.  Topic?  “How to write short and sweet for the Information Age”

Did you know the first short form message recorded in U.S. history was a telegraph message?

Innie or Outie? Quiet: The Power of Introverts {Great Reads}